In both the past and the present, University of Richmond social life has been dominated by Greek life. This exhibit aims to present evidence of racism in fraternities from 1947-1985 that created an exclusionary atmosphere for students of color, particularly black students. Whether it is Confederate flags displayed in Greek lodges, fraternity members in blackface, or culturally appropriative costumes and party themes, fraternities clearly exhibited racist behavior even as the University began to integrate and admit black students to the main campus in 1968. These photos were published in the University of Richmond yearbooks, which normalizes these racist actions and shows how representative they were of the University of Richmond experience. These artifacts bring into question the comfort of public racism at the University as these racist items were published in yearbooks well past the period of integration and into the 1980s.

The University's struggle to comply with the Civil Rights Act of 1964 and these yearbooks that display racism in fraternities give a glimpse into what life was like for black students who were admitted to a University that struggled to create an inclusive environment. Black students in the 1970s and '80s struggled with the absence of a social life for black students and experiences of racial prejudice from students and faculty. The first black fraternity, Phi Beta Sigma, joined the University of Richmond in 1980. Prior to this, there were eleven fraternities on campus, and only one black student was a part of Greek life. 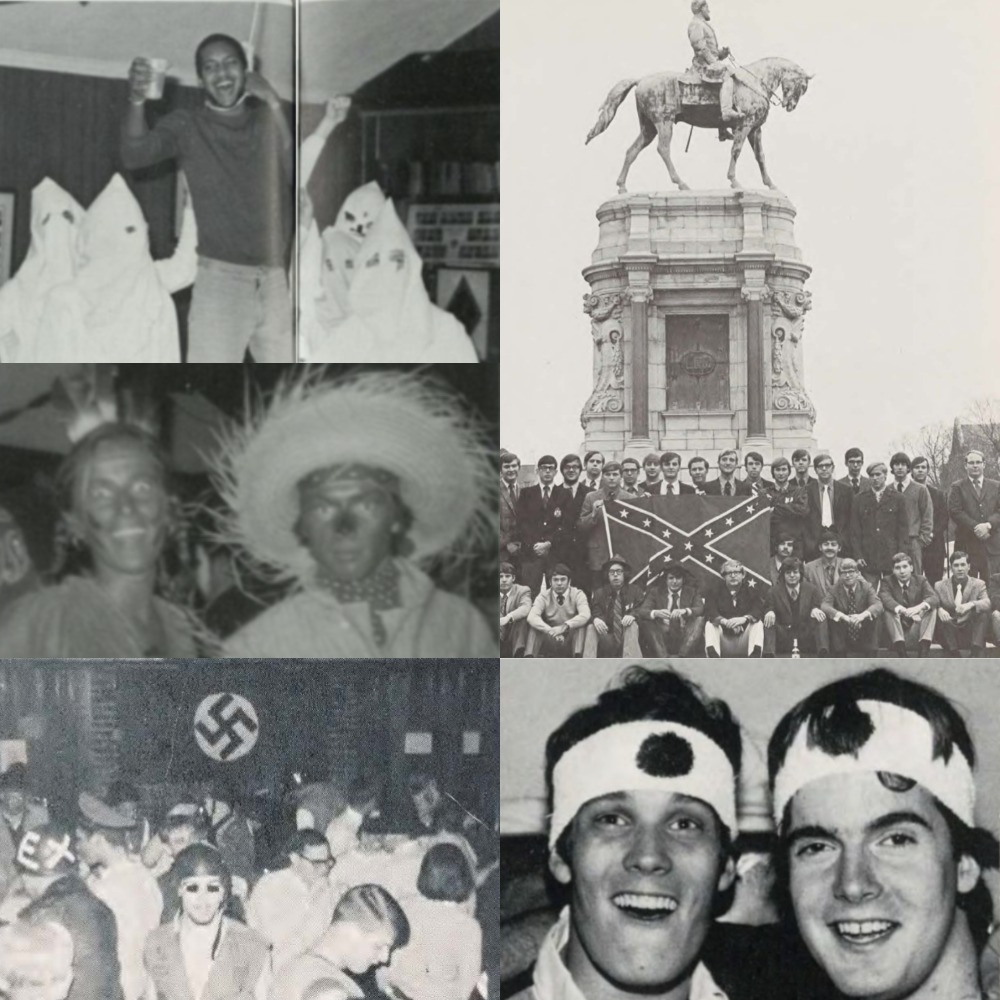 Understanding racism in the University’s past can help us navigate issues of racism in the present such as cultural appropriation in costumes and themed parties, contemporary blackface, and the black doll noose incident in 2008. Confronting the racism of this University’s past can help us understand the current issue of going beyond numerical diversity to inclusion at the University of Richmond, and it can help us navigate a future where different cultures and backgrounds are celebrated not just at this University but in the city of Richmond as well.

These fraternity pages frequently exhibit Lost Cause imagery and ideology with Confederate flags, fraternity group photos on Monument Avenue, and references to Robert E. Lee, the Old South, and the song “Dixie.” Lost Cause ideology has its roots in the justification and glorification of the Civil War as a noble cause embodying Southern ideals. This kind of reasoning hides the role of white supremacy and racism as those who hold to Lost Cause ideology often minimize or deny the role of slavery in the Civil War. Believers in the Lost Cause assert that the war was fought over states’ rights and that slavery was a benevolent institution that civilized African “savages” and brought them to Christianity.

Photographs of fraternity members posing in front of the Monument Avenue statues of Jefferson Davis and Robert E. Lee highlight the Lost Cause ideology that these statues stand for and symbolize. The erecting of Confederate monuments on Monument Avenue in Richmond, Virginia is an example of how the Lost Cause uses public space to create a celebratory and glorified rhetoric of the Confederate cause while ignoring the realities of slavery, lynching, and racism. The first statue erected was Robert E. Lee in 1890, followed by Jefferson Davis and J. E. B. Stuart in 1907, Stonewall Jackson in 1919, and Matthew Fountaine Maury in 1929. In 1996, a statue of Arthur Ashe, a black tennis player and Richmond native, was erected on Monument Avenue. The current debate over what to do with these statues on Monument Avenue confronts us with the painful legacy of slavery and an unbalanced history.

Numerous photographs in the yearbooks show students in blackface, which is when a non-black person wears makeup to represent a caricature of a black person that is often used to mock and ridicule. Blackface was historically performed exclusively for white audiences with a nonblack performer appearing in blackface to play a black role. Minstrelsy and blackface performances were common forms of entertainment on the University of Richmond’s campus in the early 1900s through the early 1960s. Although minstrel shows do not really happen anymore in the present day, contemporary blackface still exists as evidenced by the incident of a blackface Halloween costume on campus in 2007.

This exhibit was created by Kristi Mukk ('19) as part an A&S Summer Research Fellowship in summer 2018.