Silence in the Archives: The Case of Russell Jones

“ A petition was drawn and sent to the Board of Trustees and the President asking for no discrimination against any race at any future interracial affair. Today this petition is being given the well known cold shoulder by everyone involved.” - University of Richmond Collegian newspaper, 1944. 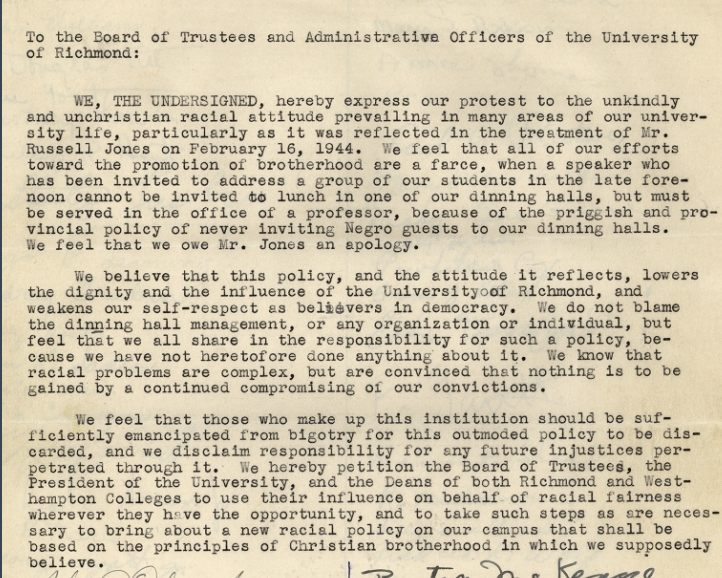 This exhibit will focus on how the Russell Jones’ case both influenced, and was already part of, a larger conversation at the University of Richmond. During the time that Jones was separated from the white students, the University of Richmond had yet to allow African-American students to attend. It was not until 1968 when the first residential African-American student was allowed to attend an integrated University of Richmond. To examine these conversations, however, we must acknowledge that one voice is missing from the story: the voice of Russell Jones himself.  The lack of documentation prevents this exhibit from telling Russell Jones’ story, and it must instead use Jones’ case as a lens through which we explore the conversations on race that happened amongst the students and administration at UR -- both those for and against bettering race relations between whites and African Americans.

This exhibit will feature a variety of sources. Articles from the Collegian newspaper, correspondence between the students and administration -- namely president F.W. Boatwright, Dean May Keller, Board of Trustees, etc. -- and local news and events, such as the Virginius Dabney Proposal, will be utilized in order to deconstruct the conversations on race that were happening during this time. The metadata suggests a number of opposing views influenced by gender, religion, and age. Yet, we recognize that we are limited by the availability of source material. Therefore, we acknowledge that we cannot fully represent the mindset of the Richmond campus during this time. However, with our evidence, we can develop an improved understanding of the complex relationships of race at the University of Richmond.