Boatwright, Keller, and the Board On a superficial level, and based upon the Collegian, the administration’s response to the student petition was minimal. President Boatwright wrote a letter to the student body, which was published in the the Collegian, in order to address the students' petition and previous letters. In this letter he made a number of statements regarding the treatment of African Americans on campus. He wrote that there is no specific policy in place that states Russell Jones should have been allowed to eat with students at the dining hall, so no university policies were being broken. Furthermore, he claimed that the university was kind and helpful toward black visitors and students -- that he himself had made efforts to better their education and economic opportunities. According to Boatwright, African Americans' social opportunities were not on his list of priorities, and that once the parents of students allowed black visitors to dine in their homes, only then would he consider changing the policy (Boatwright, 1944). This letter indicates that Boatwright was neither upset nor disappointed in the treatment of Russell Jones. It shows us Boatwright’s indifference to African Americans' right  on campus. Boatwright justifies his response with claims to have made improvement to the educational and economic welfare of African Americans. There were, however, no full-time black students at this time.

President Boatwright’s more complete story can be found in his own personal correspondence. In his letter to the student body, President Boatwright feigns ignorance as he claims he had “knew nothing of the incident until two weeks or more after it had occurred.” Given that, in a letter to Douglas S. Freeman, Boatwright reveals that he had only recently returned from a restful and pleasant Florida vacation, it’s clear that he had in fact been oblivious to the events on campus. It was not for lack of discussion or attention from the administration. He was aware that the deans disagreed with each other about the best way to handle the situation, and that other leaders within the university were aware of and responsive to the petition. His late, indifferent response to the petition is punctuated by the indifferent and self-preserving tone of his correspondence.

May Keller, the dean of Westhampton College, is a particularly fascinating subject as her letter to Boatwright is rather revealing of the contradiction of opinions found within the administration: 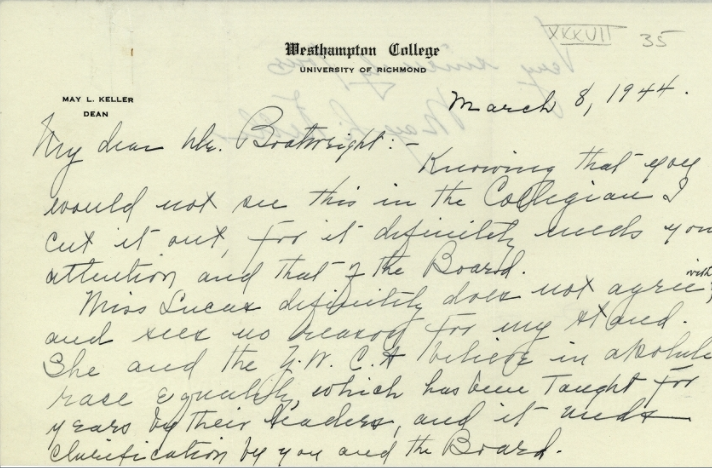 While some of the faculty and staff showed signs of being in accord with the students, the president and the board of trustees seemed as if they had predetermined opinions about the matter (e.g. Freeman’s comment about the interesting and unusual nature of the protest) and were displeased with the rise of such opinions. The private comments and suggestions to President Boatwright on the matter demonstrate the pressures, perspectives, and mindsets from which Boatwright’s “Open Letter to the Students” emerged. The students' interpretation of the “familiar cold shoulder” with which their petition was met is, if anything, supported by Boatwright’s correspondence.

← Student Activism
Boatwright, Keller, and the Board